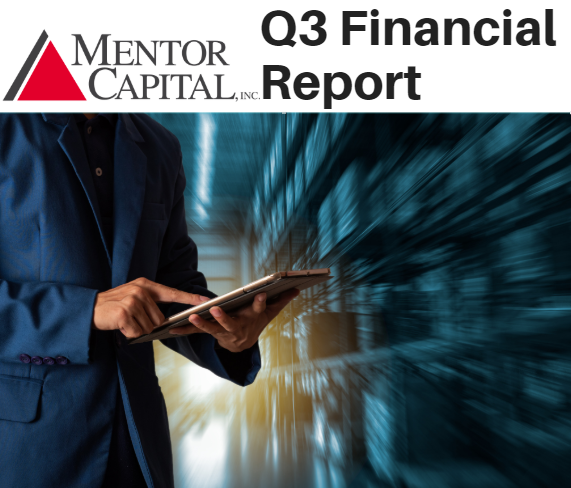 SAN DIEGO--(BUSINESS WIRE)-- Mentor Capital, Inc. (OTCQX: MNTR) announced that it had filed its quarterly 10-Q filing for the third quarter ended September 30, 2019, with the Securities and Exchange Commission.

As further disclosed in our 10-Q, due to events transpiring in the first quarter of 2019, the Company was uncertain of G FarmaLabs Limited (“G Farma”)’s ability to perform on its contractual commitments to the Company. On April 24, 2019, the Company learned that because G Farma did not follow its obligations under the Master Equipment Lease and failed to operate in compliance with local and state cannabis laws, certain G Farma assets at G Farma’s corporate location, including approximately $427,804 of Mentor Partner I, LLC (“Partner I”)’s equipment under lease to G Farma, was impounded by the City of Corona. This event significantly impacted G Farma’s financial position and its ability to make payments under the finance lease receivable, and G Farma has not made scheduled payments on the finance lease receivable or the notes receivable since February 19, 2019. Additionally, G Farma continues to hold approximately $792,425 worth of Partner I’s remaining equipment in breach of the Master Equipment Lease which required the immediate return of Partner I’s equipment in the event of default. G Farma also has failed to tender the 288,890 common shares of the Company that G Farma had agreed to resell to the Company on April 18, 2019, in exchange for a payment credit from the Company and has not paid for the stock. Subsequent to September 30, 2019, on October 3, 2019, the Company rescinded the sale and issuance of an aggregate of 288,890 shares of its common stock to G Farma, at an aggregate purchase price of $600,002, due to a complete failure of consideration.

On May 28, 2019, Mentor Capital, Inc. and the Company’s wholly-owned subsidiary, Mentor Partner I, LLC, filed a complaint against G FarmaLabs Limited, G FarmaLabs DHS, LLC, Finka Distribution, Inc., G FarmaLabs WA, LLC, and Goya Ventures, LLC, and three guarantors, GFBrands, Inc., fka G FarmaBrands, Inc., Ata Gonzalez, and Nicole Gonzalez, to the G Farma agreements in the Superior Court of California in the County of Marin. The Company is primarily seeking monetary damages for breach of the G Farma agreements including promissory notes, leases, and other agreements, as well as an action for an injunction to recover leased property, recover collateral under a security agreement, and collect from guarantors on the agreements, among other things. The Company plans to vigorously pursue the litigation.

Based on our estimate of recoverability, the Company recorded a bad debt reserve of $752,148 on the finance lease receivable from G Farma. Bad debt expense for the three and nine months ended September 30, 2019 relating to the G Farma finance lease receivable is $1,084 and $730,469, respectively, and is reflected in operating expenses in our condensed consolidated income statement. We have also fully impaired G Farma notes receivable by $1,045,051, fully impaired our $600,002 contractual interest in the G Farma legal recovery, and fully impaired our $41,600 equity interest in G Farma. The total loss on investments related to G Farma for the three and nine months ended September 30, 2019, was $0 and $1,688,825, respectively, which is reported in loss on investments in our condensed consolidated income statements.

The Company is managed by Chairman, CEO, and director Chet Billingsley (67), who founded Mentor Capital first as an acquisition partnership in 1985 and was qualified as a Registered Investment Advisor. He received his undergraduate education at West Point before earning a Master’s Degree in Applied Physics at Harvard University. His early career was at General Electric. Treasurer, CFO, and director Lori Stansfield, CPA (60), was most recently Director of Audit Services for a regional CPA firm. She graduated Magna cum Laude in accounting and received a Master’s Degree in Marketing from the University of Colorado. Ms. Stansfield is certified as a public accountant in both Colorado and California. Secretary and director Robert Meyer (80), director and Audit Committee member Stan Shaul (54), and director and Audit Committee Chairman David Carlile (63) are independent directors; each has been or is a business owner and major shareholder. Altogether, the directors and officers hold a 22.94% fully diluted interest in Mentor Capital with Mr. Billingsley’s interest reported at 16.40% on a fully diluted basis as of November 5, 2019.

The Form 10-Q may be referenced through the SEC’s EDGAR system at:
https://www.sec.gov/edgar/searchedgar/companysearch.html

Inputting the company name, Mentor Capital, Inc., or the Company’s CIK code, which is 0001599117, will bring up the report. The 10-Q can also be viewed at the Company’s web site at the Investor’s Corner section under the SEC Filings tab.

About Mentor Capital: The Company seeks to come alongside and assist private companies and their founders in meeting their liquidity and financial objectives, to add protection for investors and to help incubate private companies. In late 2019, the Company expanded its target industry from its primary focus on medical marijuana and cannabis companies to potentially include energy, mining and minerals, technology, consumer products, management services, and manufacturing sectors with the goal of ensuring investment diversification. Additional important information for investors is presented at:

Forward-Looking Statements: This press release contains forward-looking statements within the meaning of the federal securities laws, including statements concerning financial projections, financing activities, corporate combinations, product development activities and sales and licensing activities. Such forward-looking statements are not guarantees of future results or performance, are sometimes identified by words of condition such as “should,” “could,” “expects,” “may,” “intends,” “seeks,” “looks,” “moves,” or “plans” and are subject to a number of risks and uncertainties, known and unknown, that could cause actual results to differ materially from those intended or anticipated. Such risks include, without limitation: nonperformance of investments, partner and portfolio difficulties, potential delays in marketing and sales, problems securing the necessary financing to continue operations, problems involving continued illegality of cannabis products, potential of competitive products, services, and technologies, difficulties experienced in product development, in recruiting knowledgeable personnel and in protecting intellectual property. Further information concerning these, and other risks is included in the Company’s Form 10-Q filing which, along with other very important information about the Company, can be found here:
https://ir.mentorcapital.com/all-sec-filings

The Company undertakes no obligation to update or revise such forward-looking statements to reflect new information, events, or circumstances occurring after the date of this press release.